22 hours of labor. Contractions two to four minutes apart. Total dilation: 2.5 cm. Final result: an emergency c-section. This was my birth experience with my first son. In situations like these, the mother risks dying in labor and the newborn is more susceptible to succumbing to the stresses of labor as well. Thank goodness we were blessed with our circumstances. I could have easily been one of the millions of women that Save The Children report on, who die every year from childbirth. 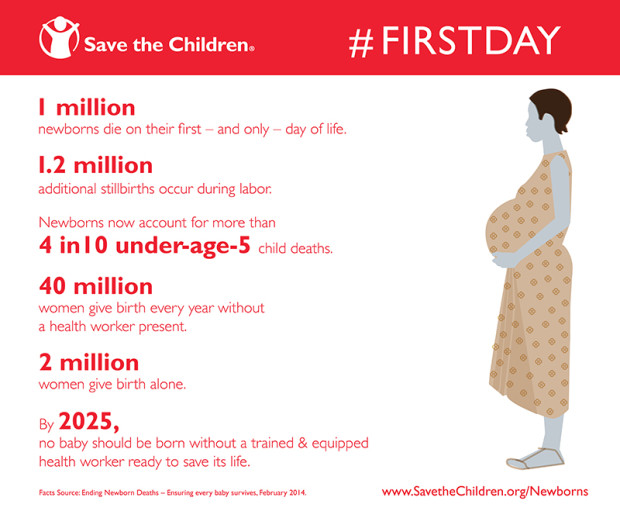 Today, 2.2 million first-day deaths and stillbirths happen during labor around the world because of a lack of adequate delivery of health services to pregnant women and newborns. Save The Children has just published its Ending Newborn Deaths Report which calls for the ending of preventable newborn deaths that range in the millions.

There is a crisis in newborn mortality.

Here are some of the figures from the Save the Children report:

The fourth UN Millennium Development Goals set a 2015 deadline to reduce child mortality by two-thirds. The world is off track. Save The Children is calling on world leaders, governments, philanthropists, and the private sector to tackle the crisis of newborn deaths by implementing a five-point Newborn Promise to end all preventable newborn deaths. Essentially, each one of these actors are being called upon to take onus in specific responsibilities.

Here’s a brief snapshot of a few of the actions Save The Children is asking of governments and the private sector:

Private Sector – develop innovative solutions and increase availability for the poorest to new and existing products for maternal, newborn and child health.

Get a better idea of the crisis that the world is facing and spread the word by sharing this post or the link to the report via email, Facebook, Twitter, etc. The only way we can enact change is by creating awareness and consequently pressure.

Every child deserves to live when their death can be prevented.

This post was written as part of the Global Team of 200, a highly specialized group of Mom Bloggers for Social Good members who focus on maternal health, children, hunger, women and girls.