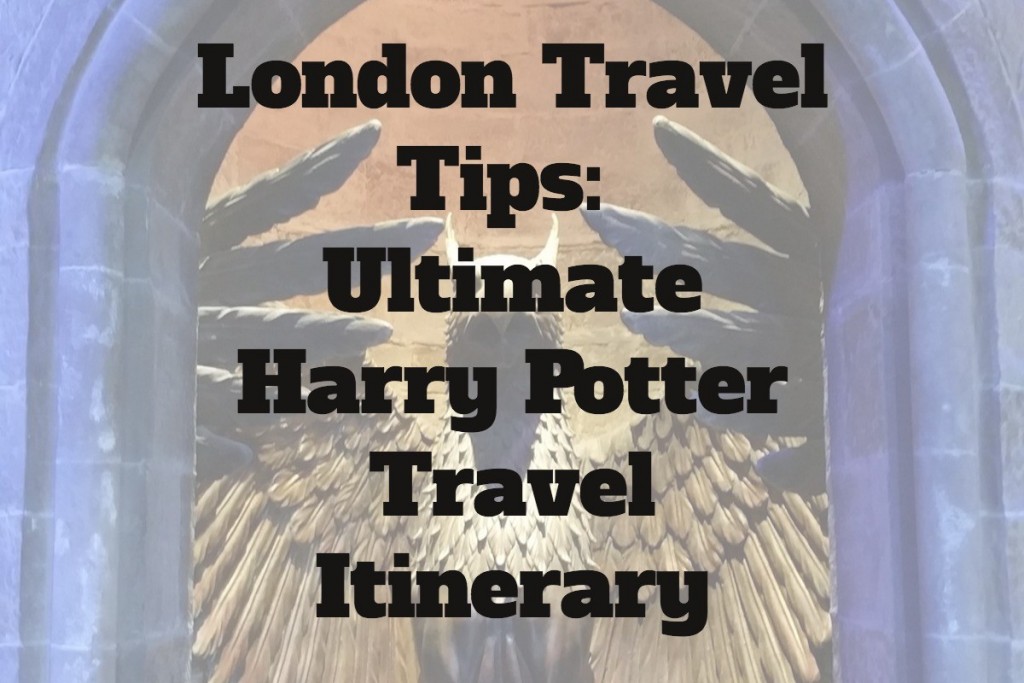 If you’ve followed any of my London travel tips on this blog for a while, you’ll know that I am not only a fan of London but also a big fan of Harry Potter.

And it’s not because my kids are into the stories.

I tried to get my son into the books and movies when he was 3 or 4 and he couldn’t be bothered. Star Wars and Lego movies were his preferred taste. So I had to unapologetically read the books and follow along in the magic of the story on my own.

When I traveled to London in 2012 just a month after the Warner Bros. Harry Potter studio opened up to the public, by a stroke of luck (or magic), I met a Warner Bros. VP while having dinner with friends. He gave me his office number, told me to call his executive assistant and had an all-access pass waiting for me to take a tour of the studio.

Score! I was ecstatic and beyond excited to visit the wonderful world of Wizadry.

From London to the studio it was a trek! The ride wouldn’t have been so bad with company but my friends were too busy being adults to come.

No matter. The day happened exactly as it was supposed to. Fate had already written the story and sketched out my adventure.

My tour of the studio was more than I could’ve asked for. I walked around for over 3 hours at my own pace visiting life-sized sets and gazing at props while warming up to a creamy cup of butter beer.

As comprehensive and fulfilling as the tour was, I didn’t realize until months later that there was more to the wizarding world of Harry Potter that I hadn’t seen.

The following post which originally appeared on the Travefy blog, shares locations around the United Kingdom from the Harry Potter movies.

Harry Potter fans, rejoice! The ultimate (and we mean ultimate) Harry Potter itinerary has been created!

While, going on the magical journeys like the famous witches and wizards did in J.K. Rolling’s Harry Potter book series isn’t possible, we can relish in the fact that some of the places do in fact exist. And we’re going to share them with you (complete with a travel itinerary, too)!

“All aboard The Hogwarts Express!” This iconic train is an actual full-functioning train, known as the Jacobite Steam Train and it looks just as good as it does in the movies as it stretches beyond a wide field of rolling, bright green hills.

The magical landscapes were used for many scene backdrops. You might notice Steall Falls at Glen Nevis from the Tri-Wizard Tournament in the Goblet of Fire (2005) and where Quidditch matches were also filmed.

Here lies the “birthplace of Harry Potter”. This is the now-famous location where J.K. Rolling wrote the first and second Harry Potter books. J.K. Rolling found it cheaper to pay for a cup of coffee and write all day at The Elephant House, rather than pay a heating bill at home. She notoriously sat on the third floor, staring out the window to the back where she saw…

The official resting place of Thomas Riddle, but not the Tom Riddle you’re thinking. This cemetery offers tons of clues to where some of J.K. Rolling’s inspiration for the Harry Potter book series came from. Like the names engraved in the stone, Thomas Riddle and James, and you can’t miss the snack etched on the grave either.

Grab your broomsticks and head off to Alnwick Castle where many outdoor scenes from the first two Harry Potter movies were shot. Most notably, where Harry and his classmates took their first flying lessons with Madame Hooch.

As if the picture of cloisters above doesn’t already show you – Durham Cathedral was the filming location for many Harry Potter films. The cathedral chapter house was the site for Professor McGonagall’s class when she taught students how to turn animals into water goblets. Also, the same place where Ron slug-vomited in the Chamber of Secrets (2002).

Also known as Platform 9 3/4. This is the holy grail for Harry Potter fans because you can actually touch it and it does exist in our muggle world! Unfortunately, your magic won’t be strong enough to actually make it to the other side of the brick wall to the Hogwarts Express. However, taking a good picture could fool anyone ?

No goblins here – the Australia House is used as Gringott’s. Unfortunately, you will need a good reason to go inside, like getting your Visa. However, the inside of the Australia House was used for all scenes inside Gringott’s with it’s chandeliers and marble columns. The exterior was created special for the films and not the way muggles see it in London today.

Do not fear – you shall find zero death eaters on your journey across the Millennium Bridge. This bridge is featured in Harry Potter and Half-Blood Prince (2009) as muggles run for their lives to escape the collapsing bridge caused by “plumes of smoke” (aka death eaters).

It has been said that this is the real Diagon Alley and that J.K. Rolling’s for the magical shopping place was inspired by Cecil Ct. It certainly does look like as you walk through the long row of shops! The only downside to your shopping adventure is that you won’t be able to treat yourself to a new robe for school at Madam Malkin’s store.

The ever-so-infamous spot where Harry Potter first spoke parseltongue. Both in the book and in the movie, this is the setting where the snake was released by Harry and set free. You will find the scene in Harry Potter and the Sorcerers Stone (2001).

Harrow School is an all boy’s independent school. In it you will find its oldest classroom, built in 1615 – and also home to Professor Flitwick’s charms class. In Harry Potter and the Sorcerer’s Stone (2001), this class is presented during his teaching of Wingardium Leviosa.

You can’t find more Harry Potter excitement than this! Go on the studio tour and walk through the Great Hall and Diagon Alley, where the Harry Potter movies were filmed, and check out the amazing special effects that make magic come to life!

Follow the footsteps of Harry Potter and the cast through many filming locations at Oxford’s college. One of the most popular destinations is on the staircase which leads up to the Great Hall – it was used for the arrival scene for new Hogwarts students in the Sorcerer’s Stone(2001) and Chamber of Secrets (2002).

The magical cloisters found at historic Gloucester Cathedral was transformed into the corridors of Hogwarts Witchcraft and Wizardry. Many other popular scenes from the first two Harry Potter films can be recognized here like, the wall where we were enlightened that the Chamber of Secrets had been opened while written in blood, the door that led into the girl’s bathroom where Moaning Myrtle infamously would hang out, and the door to the Gryffindor dormitories.

The cloisters in Lacock Abbey is where Harry comes our of Professor Lockhart’s room after serving detention in Harry Potter and the Chamber of Secrets (2002).

Walking through this village, you will feel as if you stepped into the magical world too. The cottage backdrop can be found in Harry Potter and the Half-Blood Prince (2009).